Is it in the Best Interests of the Child? 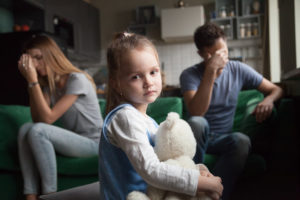 When Kentucky lawmakers passed an equal parenting time and joint custody presumption law that went into effect in the summer of 2018, I don’t recall it asking the family law bar our thoughts or seeing much opposition. Maybe it was because many of us anticipated it and several Judges in Jefferson county were clear they were “half time Judges” prior to its passage.

It surprised me then, when I recently saw an Illinois law firm I follow on social media tweet massive opposition to Illinois’ renewed proposal this year to enact essentially the same law Kentucky did in 2018. Kentucky’s law is codified in KRS 403.270(2). The Illinois proposed bill is House Bill 0185. To the presumption of equal parenting time opponents, the presumption proposal usurps the best interests of the child standard and is a one size fits all approach to custody and parenting, which many lawyers and mental health professional alike say is bad for kids.

The problem of the presumption lies in parents’ inability to communicate and flex, key behavior traits to successful co-parenting, opponents say, which ultimately leads to unhappy children who feel like batons being passed between runners during alternating laps. Advocates for the parenting presumption believe parenting time should not only be gender neutral but automatically divided between parents based on their rights to the child and the concomitant rights to parenting time to the child.

From a glance at the Illinois’ presumptive parenting bill proposed, the language is very similar to Kentucky’s new law: equal parenting is presumed unless the court finds the evidence presented by one of the parents is sufficient to rebut or dispel the presumption. Evidence presented might be:

Coincidentally, it’s the same evidence courts looked at here more than a decade ago to determine if custody should be joint or sole and what kind of parenting schedule would work at all.

In those days, “meaningful contact” between a parent (read a father) and a child didn’t have to be more than every other weekend or even non-overnights, so long as the bond between the parent and child was present and the parenting time fostered the bond. As the years passed, a cultural shift occurred that included the rise of non-traditional families and parents were impelled to change their lives to accommodate their family structures and their children. The shift included bread-winner moms, stay at home dads, same sex parents and, more recently, couples who cohabit and have children.

According to a recent Pew Research Institute article, over the last 50 years single motherhood fell from 88% to 53%, and single dads make up 12% of the parenting population. Of the couples who have children together and live together, they are more likely to have children from another relationship, too.  While critics of looser family structures believe marriage is the solution to more income availability to raise children, marriage rates are down but for older and whiter and more educated families and even for them, they choose to have children at later ages than their parents did.

The times. They are a changin’. What remains to be seen is whether a half time parenting presumption is a trend in response to the changing realities of parents and their relationships, as measured by both longevity and the structure of the relationship, or the way to ensure two people who have a child together will equally share in the life of that child. The ultimate question is to whose benefit is the half time presumption though – the parents who have rights to the child or the child who arguably has the right to parents who don’t hate each other, use the child as a pawn in their never-ending quest to “gig” each other and make the child’s life miserable?

Unfortunately, lawmakers can’t legislate healthy parenting and courts can’t go home with litigants to monitor their parenting and give them behavioral cues. Artificial intelligence might be able to, but we aren’t quite there yet and the omnipresence of a robot who guides your parenting and offers instruction might lead to more resentment against the device than the other parent. That might be preferable for a child caught in the middle of parental conflict, to be sure.

If the equal parenting time presumption replaces the factors to determine what’s actually in the best interests of the child for custody and parenting determinations rather than incorporates the factors when a parent attempts to rebut the presumption, I agree with the opponents of the presumption that it usurps the best interest standard in favor of a parental rights standard. What Kentucky family law has always done well is require parents to show how a proposed parenting plan benefits the child. Arguments a child should be with a parent more “because I am the mom,” or “because I deserve the time” have never held water here. Yet.

As We Move Forward

More will be revealed as parents challenge the equal parenting presumption and courts sort through what evidence is sufficient to rebut it and what falls short.  What we know is the culture will shift again and parents and interest groups will lobby for new and different law surrounding how people have children and what role the courts play in governing how they are raised. It’s a good thing kids are resilient. Let’s make sure to prioritize their overall health and well being in determining the true best interests of the child over a legislative or courtroom win.