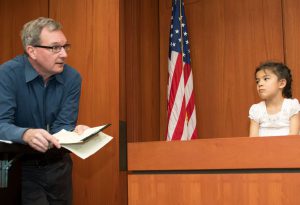 Question : Can my child testify during a divorce or custody case? Despite many rumors and myths to the contrary, in Kentucky, probably not. While there is a statute that allows a Court to interview a child in camera (in chambers) to elicit specific testimony, the interviews are rare in my experience and often unnecessary considering the other options a family court here has at its disposal.

The Court has the authority to appoint aides and helpers to make recommendations and write reports concerning the best interests of the child and what parenting schedule and custody arrangement will best meet them. The Court cannot, under any circumstances, rubber stamp a custody evaluation by a psychologist for example. Nor can it sign off on a recommendation or report over a parent’s objection via counsel, if there is a legal basis for the objection, versus the parent simply doesn’t like the result.

The fundamental questions in Kentucky custody and parenting cases are a) whether both parents are able to make decisions for children that serve the children’s best interests and if not, what custody arrangement is the most effective if it’s not joint and b) whether a proposed parenting plan serves the best interests of the children considering a laundry list of factors, including under the new equal parenting presumption, a parent’s motivation in the custody proceeding and the influence a parent may have over the child’s wishes as to with whom they live.

It is in the most contentious cases that aides to the Court such as guardian ad litems, or lawyers for the children, are vital, as it’s in those cases, again, in my experience, that both parents want the child to testify or to “talk to the Judge”.  Often one of the parents repeatedly questions the child about who the child wants to live with and interrogates the child about what the child did with mommy or daddy during parenting time, to gather ammunition against the other parent.  These are exactly the questions, and the style of questioning, Courts and counsel alike discourage parents from asking their children, and the scenarios the Legislature and Courts sought to avoid by allowing professionals to speak to the children and then speak, perhaps, on their behalf.

This is not to say that there are not situations in which the Court may deem it necessary to interview a child in chambers to elicit a child’s testimony to aid in issuing a parenting or custody Order. The risk to litigant parents is children often say things the parent never expected, let alone things that aren’t helpful to the parent’s case. Then there is the omnipresent risk of trauma to the child from being hailed into Court to talk to a Judge about what mommy or daddy does that makes them uncomfortable or hurts them, emotionally or physically.

Parents may best serve their children’s needs, and their own, in a case by treading lightly in conversations with their children about the other parent if they must talk to their children about custody or divorce beyond an initial divorce announcement. Therapists, counselors and other helping professionals who are trained in child psychology and/or trauma, likely know the best approach and best practices to learn a child’s wishes and needs and present them to the Court.

Ultimately, the Court makes the decision about custody and time, unless parents agree without judicial intervention.  Hearing that a parent regularly debased and blamed the other parent for the complaining parent’s problems, or the divorce or separation itself to the child, or threatened self harm or expressed an inability to “be okay” if the child indicated a desire to live with the other parent, or that the child is wrong for even loving the other parent, might make the decision easier for the Court. Let kids be kids. Leave the heavy stuff for the grown-ups.